When I wrote the Poison of Precaution earlier this year, one piece was missing from that puzzle. What was the logic behind the acceptance that being right didn’t matter? And why do some scientists, who know better about what is not right, then tolerate this scientific illogic? I had to put precaution into a belief system.

What would happen if we compared the precautionary principle from today’s environmentalist religion to Pascal’s Wager on the existence of God from pre-Enlightenment Christian religion? Both do not follow an evidence-based approach and build their logic on the conclusion that, in the face of uncertainty, being factually correct is not as important as the potential consequences from the risk of being wrong. Just as Pascal’s argument is neither genuine nor convincing, the precautionary logic does not reinforce the eco-theology and is merely a manipulative tool to emotionally manage away uncertainty.

When your belief system is built on fear, it’s obvious decision structures will be cautionary. Whether it is our present eco-religion or medieval Christianity, fear of the unknown overpowers the quest to discover, leading believers into a rush to safety. What we seek in the emotional concept of safety is protection – to not suffer negative consequences (avoiding cancers from chemical exposures or eternal damnation in a hell of unbelievers follows the same logic of fear).

Science, historically, has confronted all religious belief systems with the objective of discovery, problem solving, progress … The scientific method aims at being right, strengthening good practices and rejecting falsehood; the religious reaction aims at not being wrong (and inflicting less harm). The main difference then between the scientific logic and the precautionary logic is whether being right matters.

The Logic of Fear

This precautionary logic is a logic of fear: that not being right is OK so long as you can guarantee you are never wrong. In speaking events, I often do my umbrella skit. I always have an umbrella in my briefcase. I wasn’t right when I brought my umbrella on a sunny day, but I wasn’t wrong – it was a precautionary measure. I would bring my umbrella tomorrow even if the weather forecast is for more sun.  A precautionary logic allows that not being right is not the same as being wrong. This normalisation of error-free non-decisions (where it’s not worth the risk of being right or wrong) is what develops in a culture dominated by a logic of fear (where precaution usurps the scientific logic that you are either right or wrong).

Interestingly, the logic of fear builds its own rationality that today we call precautionary reasoning: pragmatic, ends-oriented (rather than rule-based) and non-linear. It is Machiavellian rather than value-driven and I have seen the hand of Machiavelli behind most green activist fear campaigns.

To see the rationality in today’s eco-religious fear-based system, we need to go back to a previous cultural narrative. Blaise Pascal understood this logic of fear. As a mathematician, Pascal was a betting man. While he understood there was uncertainty about the existence of a benign God reserving a place in heaven for the good, the safe bet was to believe in order to not be wrong (and face eternal damnation). If Machiavelli considered belief in God to be a useful end, Pascal’s Wager provides the perfect means.

Pascal can be considered to be the founder of the precautionary principle (sorry Mr Gee). And if Pascal were not right, then that would really not be a problem for living a virtuous life had a worth on its own that could justify avoiding the need to act on an evidence-based decision. Actually being right didn’t matter. “What’s wrong with that?” the believers would ask.

Except… a fear-based belief is not genuine, it is pragmatic. It would be like someone telling me he is only my friend because being my enemy scares him … not really a genuine friend I surmise. But if you were to tell me that it is better to have a room full of false friends than to take a stand and risk some enemies, then we would need to have a conversation on what you think about integrity.

There are many eco-religious cases where this fear-based, Pascalian logic (where it’s OK even if we’re wrong) is postulated as a better solution. I will argue that it does matter if you are wrong, if anything just from the point of intellectual honesty. Here are some examples where scientists looking the other way for precautionary purity have undermined their own academic integrity.

Groups like Extinction Rebellion are propagating their idea that a mass extinction of humanity will take place in the next decade. There is no truth at all in any of these Hallamisms but the more he and others like Alexandria Ocasio-Cortez say it, and the more doom-laden the conclusions (“six billion people will die from starvation or mass slaughter in the next decade”), the more absurd the silence from the climate experts is. (The head of the WMO spoke out only once against the alarmists, the other climate scientists have been silent with the facts.)

What is causing this silence in the science community during this present climate alarmist rampage? Is it fear of ad hominem attacks – where a simple correction of some basic facts could spark a backlash of “denialist” accusations? Is it a Pascalian pragmatism: well at least some one is finally saying something and making progress in raising public attention about climate change (even if Hallam is a ludicrous fool)?

This has created the rise of the declared alarmist consensus. I prefer to call it the silence of the rational.

“What’s wrong with that?” the believers would ask. These carbon-emitting products have many terrible consequences. Getting rid of meat, cars, flying and pets, even if they are not the issue, will be for the better.

There are a number of, sorry to say, pure lunatics leading the charge against glyphosate, like Zen Honeycutt, Jeffrey Smith, Brent Wisner or Stephanie Seneff. They claim that glyphosate is the cause of every possible ailment (or well-marketed pseudo-ailment) to have inflicted the human race including such winners as glyphosate exposure causes gun violence, or leaky gut, or autism or lower IQs… Activist scientists like Benbrook, Antoniou or Landrigan will quietly tell each other behind the scenes to “avoid these lunatics like the plague”, but it is very rare that they will publicly call them out on their absurdities. 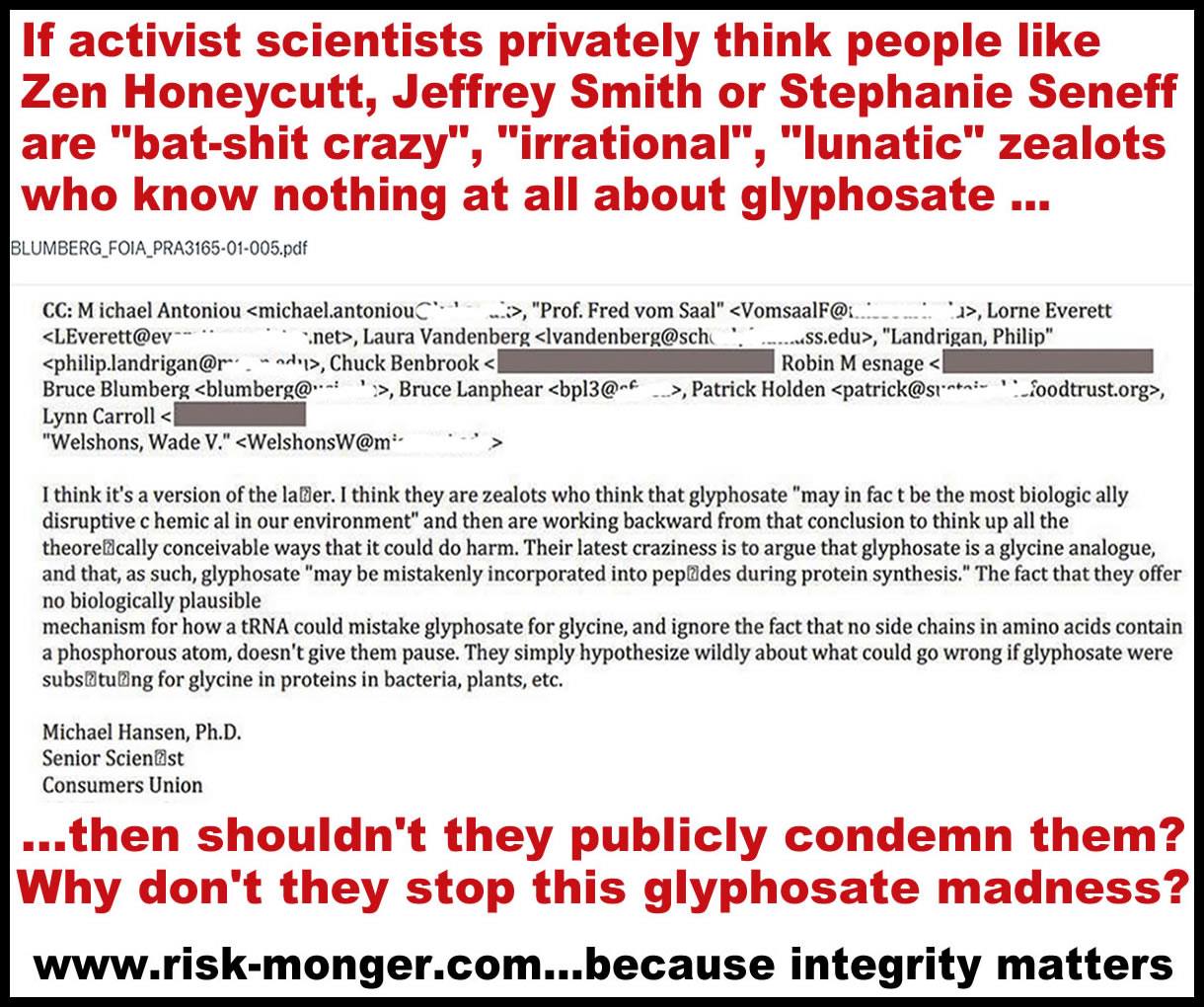 Why would these  people, who call themselves men of science, forsake trust in science and research integrity and pass over the fear-mongering of these dogmatic zealots in silence? Could it be that the enemy of my enemy is my friend? Or is the money from these well-funded groups too good to pass up?

I suspect the PR and communications experts running these NGOs know very well that a campaign can only win if it speaks with a clear message (and they run a very tight ship). That being said, I suspect that a little bit of Antoniou’s soul dies each time Zen or Jeffrey turn to twitter (Benbrook’s soul has long since been pronounced deceased from endless shady funding transactions). At the end of the day, though, these scientists are more pathetic than the zealots they publicly tolerate since they themselves know better but choose to let the lunatics frame the debate.

“What’s wrong with that?” the believers would ask. These chemicals and seeds are terrible things. Getting rid of them, even if it is not the issue, will be for the better.

The industry witch-hunt is getting too easy and rather boring and cliché as critics no longer even feel they have to justify their personal hypocrisy of enjoying the benefits of technology while demanding the mass removal of the innovators who provide them. I have written elsewhere that Monsanto is the “New Jew” in the fascist pogram. As our lives have become more economically secure and the advanced logistics network able to compensate for any supply disruptions, it has become a commonly accepted call to “throw the industry bums out”. 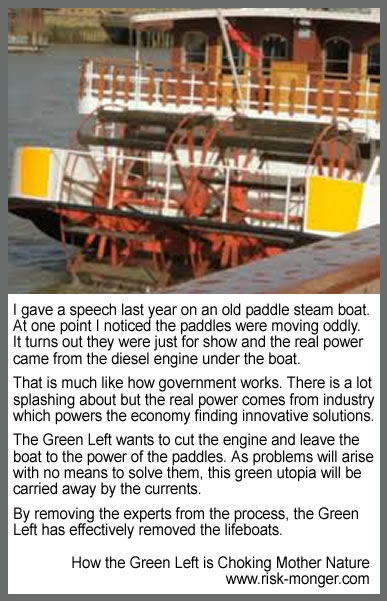 I find it quite worrying that the tools for eliminating the engines of sustainable innovation are in place. Activists have teamed up with lawyers and a few bent scientists to tobacconise other industries (sue them out of existence). When countries or organisations put the activist concept of ecocide into legal codes, one by one our innovative industries and job providers will lose the means to exist.

How will we face the climate challenges today without these technology giants? With NGOs funded by trusts and foundations? With 16-year-olds going on strike? How will we feed a more affluent global population of ten billion people? With social justice theories from agroecologist lawyers? By removing the agricultural technologies that can increase yields on less land while protecting biodiversity? I have argued before that killing off our best hope is something only a terrified mob would do.

“What’s wrong with that?” the believers would ask. These companies are doing terrible things. Getting rid of industry, even if it is not the issue, will be for the better.

There’s a lot wrong with that

The common Pascalian refrain “What’s wrong with that?” leaves a believer feeling unfulfilled. Not being wrong is a negative fix without a positive vision. For the traditional Christian believer, this safe-bet deity is not something worth genuflecting to – it is merely meant to silence the detractors. It provides no positive vision to guide faith.

So too for precaution and the environmentalist flock. Invoking the precautionary principle merely clears the room of the heretics who would favour scientific innovations and research solutions.

That these religious gurus are leading the regulatory debates and influencing an unthinking media is pure madness.

Like Pascal’s empty bet on a deity’s existence, the environmentalist’s precautionary logic of fear offers us nothing positive to build on nor to believe in.

There is a lot wrong with that.