Last week’s condemnation of Greenpeace by 110 Nobel Laureates for being anti-science on GMOs did not come as any surprise to most people. The King of Mean Green uses bully tactics rather than science to force their lobbying position, using poor, often retracted studies as a basis to run ethically-challenged PR campaigns that fill consumers and brand managers with an equal balance of fear and loathing. I suspect the Nobel Laureates spoke out as Greenpeace was leading the same dishonest tactic on Golden Rice that they had pulled off on glyphosate the year before.

The week that ended with the Nobel Laureate’s lambasting of Greenpeace (accusing them, rightfully, of crimes against humanity), began with the European Commission abandoning its responsibilities towards farmers and European consumers by capitulating to NGO and Green Party pressure on renewing the authorisation of glyphosate: the most widely used and most studied herbicide. This indicated not only a failure of European leadership, but a clear success of the lamentable NGO strategy of using activist scientists to serve as the foundation of credibility assassination campaigns.

This blog will be divided into three parts: the first reviewing the activist strategy IARC used to get a “probably carcinogenic” decision; the second part examines a new publication that demonstrates the abhorrently poor choice of sources the IARC glyphosate monograph relied on to reach this conclusion; and the third part will question whether IARC is indeed even a WHO agency or merely pretending to be as a means to assume credibility for its activism. 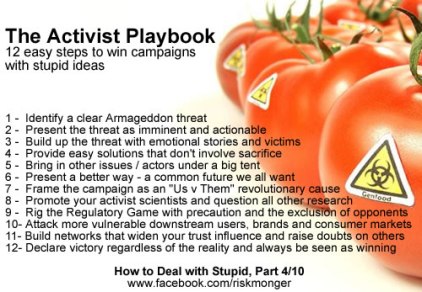 The Activist Playbook strategy is simple, cunning and highly unethical. It essentially involves getting a second-rate scientist (a Séralini, Goulson, Kortenkamp or Portier) to get a paper published in some journal (usually a pay-per-peer review low-impact rag) and let the NGOs pick up the scent and run their stink campaign. By the time the paper is panned, debunked or retracted, the damage will have been done, trust lost and the funds raised from an outraged and frightened population (the “vulnerabilia” class).  A lie can travel halfway around the world before the truth can get its boots on.

In the case of glyphosate, a statistician from the Environmental Defense Fund, Christopher Portier, wormed his way on as the chair of the IARC external advisory committee (even though he had just finished a six month visiting researcher stint at IARC under the head of monographs, Kurt Straif) to propose an IARC study on the carcinogenicity of glyphosate, the main active substance in Monsanto’s Roundup. (See supporting links to these paragraphs from a previous blog.) A year later, Portier found himself as the only external member of the IARC Working Group serving as the technical adviser (a statistician advising IARC on a toxicological study) in what will probably be known as the greatest activist science escapade of all time. The IARC Working Group concluded that glyphosate was probably carcinogenic.

The rest of the story is well-known, especially to readers of this site. Portier spent a year lobbying to ban glyphosate through letter writing campaigns, speeches, interviews as well as advising political leaders from the German Bundestag to the European Commission on the hazards of glyphosate while using IARC’s conclusions. Money well-spent by the Environmental Defense Fund. The rest of the scientific establishment, I mean everyone (EFSA, the German Federal Institute for Risk Assessment, the EPA and even the WHO itself) rejected the IARC findings outright with the head of EFSA even charging IARC with being caught up in the “Facebook age of science“. Still, as a political machine, IARC went on the offensive forsaking decorum and integrity by trying to discredit all other scientific organisations that challenged them (using the tried and tested NGO strategy of claiming industry involvement as an exclusionary tactic: argumentum ad Monsantium).

The NGOs ignored the voices of mainstream science, feted Portier and repeated the terms “World Health Organization” and “probably carcinogenic” into every third sentence of their anti-GMO, pro-organic campaign literature. Given the absurdly low toxicity of glyphosate (below that of common ingredients found in cookies and chocolate), the fact that the NGOs succeeded in handcuffing glyphosate should provide a learning experience for all policymakers. Indeed, when the NGOs tried to pull off the same Glyphosate 101 bullshit on Golden Rice, using a widely debunked activist science article to run a campaign, the Nobel Laureates decided to take a stand.

Credible scientists are slowly (and painfully) learning not to tolerate the shenanigans of these activists and are learning to separate the wolves from their NGO packs. The activists within IARC need to be removed and IARC itself will need to seriously consider how to restore its credibility within the scientific community. The end of this blog will show how I think this is impossible so perhaps shutting IARC down is a viable option.

IARC: How low can you go?

The science on display during the IARC glyphosate Working Group was so political, so activist-driven as to not even qualify as scientific by any standard I am aware of. I have commented on how the decision of carcinogenicity was publicly predetermined before the discussions had even begun. I have shown how IARC consciously tried, on two occasions, to hide Portier’s conflict of interest with his affiliation with the Environmental Defense Fund, an NGO with a history of attacking pesticides. I have also shared a link of a scientist who comprehensively panned almost every part of the IARC glyphosate monograph. Now, a report has just been published in the journal Environmental Science and Pollution Research that adds even more fuel to the fire.

Professor Frank N. Dost, a professor in agricultural chemistry and forest toxicology from Oregon State University took IARC’s scientific credentials to pieces in his contribution: “The critical role of pre-publication peer review—a case study of glyphosate”. His main conclusion is:

These examples of faulty or inapplicable research exist because of inadequate pre-publication review as well as faulty procedure. They erode confidence in every other reference quoted in the monograph. For Monograph 112, only one conclusion can be drawn from the use of studies that should never have seen print or that consider only mixtures but not their components: IARC has provided no credible information about the carcinogenicity of glyphosate.

Ouch! Dost’s analysis of every unscientific flaw in IARC’s glyphosate study is painful to read for those with sympathetic hearts … which is why I will take you through the main points.

In short, after reading Dost’s litany of poor methodology and mal-intent, I would have to conclude that IARC is guilty of activist science. Several years ago, I defined activist science as the use of scientific sounding approaches and white coats to support environmental activist campaigns. Whereas a conventional scientist gathers evidence and draws conclusions, an activist scientist starts with conclusions and looks to select the appropriate evidence. Activist science is politically motivated, PR reliant and inflexible towards challenging data. This, clearly, is what IARC has done with glyphosate.

This seems like a simple question. IARC is the cancer research arm of the World Health Organization … right?

I saw an interesting blog from IARC’s head, Christopher Wild, who refers to IARC as: “an autonomous research agency, within the framework of the World Health Organization (WHO)”. Wordsmithing aside, IARC is autonomous and relies on private fundraising and donations from cancer organisations (think about that next time you donate or participate in a pink ribbon event, that you might be paying the expensive salaries and travel costs of some very ineffective activist scientists).  Stressing IARC’s autonomy means Mr Wild does not have to listen to other agencies, the WHO or the UN. And any evidence presented by the scientific community can be ignored – no need to retract disgraced monographs if you are autonomous. No need to show respect to scientists if you are autonomous. Being autonomous does not imply being bound to a higher standard or capacity (monkeys are autonomous).

“Within the framework of the WHO” is another interesting expression Wild cunningly crafted. In their history section, IARC states that they were established by the French government in 1965 (much of their financial support is still coming from French agencies). President de Gaulle then pressured the WHO to recognise IARC in a resolution passed in the World Health Assembly. To this date, they only have 25 member countries so it is hardly representative of a UN body, but by saying they are within the framework, I suppose they could pretend to ride on the coattails of the WHO’s credibility (and yet, at the same time, the WHO cannot discipline them for using bad activist science).

And they do not have to behave like a UN agency. IARC-gate is just one example of poor, undiplomatic behaviour by an international organisation. For their lavish 50th anniversary celebrations last month, 1050 scientists attended their main conference in Lyon. Not a single attendee was from the pharmaceutical industry (where most of the leading research on cancer is taking place). Were they not invited? This is indicative of IARC’s built in anti-industry bias (also evident in Kurt Straif and Kate Guyton’s trash talking of other agencies who used industry data on glyphosate). This is an organisation that, simply put, does not give a shit what others think!

So IARC must be a bit like IPBES (the Intergovernmental Platform on Biodiversity and Ecosystem Services), another organisation that was voted into existence during a well-meaning UN assembly but then left on its own. Nobody seemed to know what to do with it, so the IUCN has since served as IPBES’ nanny wet-nurse. Neither IARC nor IPBES use the UN “.int” website identification.

I wrote both IARC and the WHO to ask them what their relationship was. I wanted to know if I could correctly refer to IARC as a WHO agency. Neither organisation replied to my mails.

So here is the situation:
– IARC is not what it pretends to be;
– Its science is far below what basic procedures and methodology expect it to be;
– Its activism is far below the standards of what international diplomacy should be.

… This is my definition of a fraud.
Within the NGO community, IARC could be defined as a glorious opportunity.

If anyone still does not understand why the 110 Nobel Laureates took the responsibility to speak out against the misuse and abuse of science by activists, please follow this link!

Image source (Note that IARC threatens to sue anyone who uses their logo in unfriendly articles. This is not an official logo of IARC and thus may keep their lawyers busy for a bit)